Here’s how my day went yesterday leading up to the Battle 1–Day 1 squash meal: Good luck, Julie! You can do it, Julie! Why is your first vegetable the vegetable that gives vegetables a bad name, Julie? Squash? Gross, Julie! Way to go, Julie! Can’t wait to hear how it goes, Julie! Squash reminds me of poop, Julie! Did you buy beano yet, Julie? You have such great hair, Julie!

I also spent a lot of time researching squash casserole. And by “a lot of time” and “researching” I mean, I read my mom’s recipe, asked Lauren how she does it, and Googled one other recipe online. This was very time consuming because then I had to spend time thinking about how to reconcile the differences among the three styles:

When I got home from work I still had about three hours until dinner needed to be ready so I immediately…sat on the couch and did nothing. I waited. Right after all that sitting and waiting I learned a valuable lesson: Just because the recipe says a food item will take 30 minutes to cook doesn’t mean the whole cooking experience will only take 30 minutes. To be fair, I did actually build an extra 10 minutes into my dinner prep schedule, so I thought I was looking at about 40 minutes start to finish. But here’s where I went wrong: I don’t know how to cook.

Fortunately, right around the time I was going to have to call my mom or get into some really serious Googling, Christa showed up. Christa is my friend who knows everything there is to know about fresh food. I actually know a lot of people who know a lot about fresh food, but a school of public health gave her a fancy piece of paper that says she knows a lot and a bigwig federal government agency thinks she’s an expert, so I was pretty relieved she appeared right as I was about to mutilate my squash. It took a lot longer than 10 minutes for Christa to tell me 27 times how to slice and cut the squash (the wine had nothing to do with it) and then how to tell if it was done boiling, but we got it done. Thank you, Consummate Supporter Christa.

I have to admit, once the squash was “boiling” my kitchen was starting to smell pretty good and I was feeling warm fuzzies toward the whole project, mostly because I was pretty convinced I was going to win this one, and if I could win this one, I knew I could win it all. The uncooked squash already had a yummy, buttery smell while I was cutting it, but once it started boiling it filled my house with a beautiful, home-cooked warmth. I was shocked how quickly it transported me back to squash casserole nights growing up, and I remembered how much I loved the smell then, and how disappointed I always was to learn that yummy, yummy smell was yucky, yucky squash. I was really excited that yummy, yummy smell tonight might just turn out to be yummy.

Then the buzzer beeped. We made a big to-do over my Suzy Homemaker-esque removal of the squash from the oven. We took photos. And there it sat. That big pile of squashy, gooey mess. I briefly considered gagging and vomiting, but that seemed self defeating, so I forged ahead. 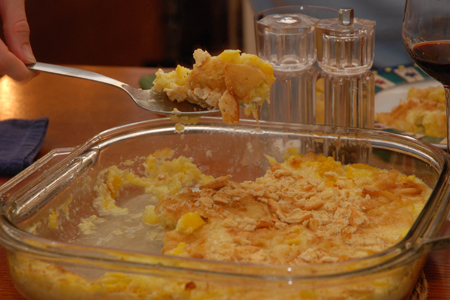 And so. My mom’s recipe follows, with my modifications:

6-8 yellow squash, sliced
(I got three massive squash from Uninterested Farmer, and that was plenty, I sliced them and diced them because they were so big)
2 eggs
(I used two brown eggs, which sparked a debate over whether you can really taste a difference between brown and white….I prefer brown)
2 tablespoons butter
(I started with 2 tablespoons and very quickly went to a little more than half a stick….more butter never hurt anyone)
1 cup grated Sharp Cheddar Cheese
(I started with 1 cup grated organic sharp white cheddar, but it didn’t look like enough, so I added a lot more)
1 cup (or so) cracker crumbs, saltines work best
(I used my favorite crackers, Cabaret, which I almost always get at the DeKalb Farmer’s Market, but I think I’ve seen them at Publix, too)

Pour into buttered baking dish.
Sprinkle with cheese.
Top with cracker crumbs.
Bake at 350 COVERED for 15 minutes.
Uncover and cook for 15 more minutes.

Those of you who spent all day yesterday telling me that you think squash tastes like or is the consistency of poop, try it this way, or I will do it for you and I’ll hold your hand. I’m a squash casserole convert.