Can we just clear up a few things about peppers? A) Did you know they aren’t all hot? OK, that’s it. Just A. Don’t you think there should be like a Pepper Association of America (or of the world or the galaxy or the universe) that’s responsible for disseminating information to the public about the fact that only some of the most notorious peppers are hot? I think so. I’m going to look into this. Here’s why: I generally don’t love hot foods. I generally like bland food (David says I like beige-colored food). I’ve gone my whole life avoiding all peppers because I thought they were hot. Hot-t-t-t-t, HOT. And don’t you think, given the pepper’s position in popular culture (…ever heard of the band Red Hot Chili Peppers? Or the little Johnny and June tune Jackson? “We got married in a fever, hotter than a pepper sprout…”), this is a reasonable assumption? I’m going to go ahead and blame my parents for allowing me to stereotype all peppers just because of a few unruly, spicy sizzlers. Thanks, Mom, thanks, Dad.

So everyone has been going on and on to me about how much they hate green peppers, and I just figured this was why. Because my world revolves around me and I don’t love hot shit, I figured green peppers must be the hottest. They’re not. I don’t know what the big fucking deal is about the green pepper. I didn’t love it, but I don’t know why it has to draw such ire from all you naysayers. Lighten. Up. 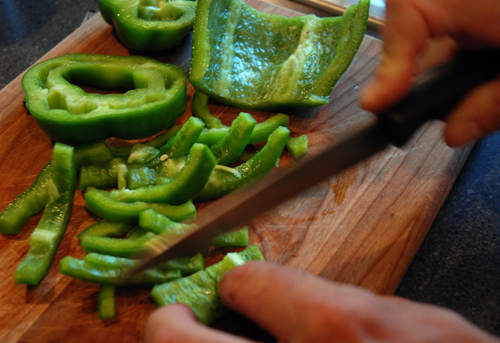 I put my green peppers on pizza. I figured if it was such a scary monster, the best way to tame it would be to put it on something I love and I love pizza. And the main reason I love pizza is because it’s a big piece of bread (beige food) drowned in cheese (beige food). So yesterday when I was all like, ‘I’ll probably default to pizza a lot,’ what I meant by that was pizza equals easy. But of course I’ve never made pizza before. Surprisingly, I actually forget sometimes when I go into the kitchen that I don’t know how to cook, and I think things like, eh, it’s pizza, how hard can it be?

Not only was pizza not easy, it was probably the hardest thing I’ve made so far. And I almost fucked it up so much it nearly didn’t happen at all. I got the pre-made dough in the bakery section at Publix (many thanks to Occasional Supporter Melissa B. for pointing me right to it yesterday), some expensive organic tomato sauce (I don’t know crap about tomato sauce, but expensive and organic seemed like a good combination), basic mozzarella cheese, mushrooms (to prove that once I’ve added one vegetable to my diet I can keep eating it week after week), one green pepper and Italian sausage (obviously). I thought I was off to a brilliant start with these ingredients; I would make a fresh, colorful, homemade pizza all on my own. Then I opened the package of dough. And looked at David. And he shrugged. I struggled with it, kneading and pulling and wadding it back up again, for a solid 20 minutes before giving up and asking David what he thought I should do. He shrugged again. “I don’t know anything about pizza.” I glared at him. All these years he had me duped into believing he was this amazing cook, but really he was just saying that because he didn’t have to cook because I wouldn’t have eaten whatever he wouldn’t have pretend cooked anyway. Naysayer! 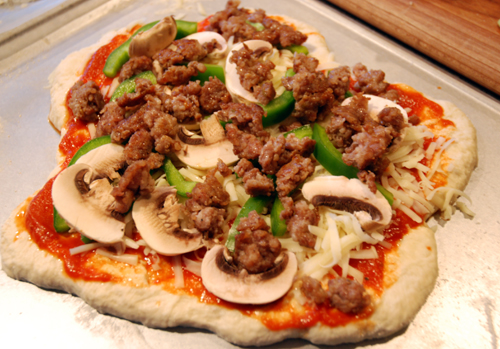 While all this was happening David was heating the grill, which is a Big Green Egg at our house, because our friends Tom and Melissa B. just rave about pizza on the Big Green Egg. I had talked to Tom earlier in the night to make sure I had dotted my Is and crossed my Ts for preparing the egg for pizza, which included putting corn meal on the cooking plate so the pizza didn’t stick, and I was pretty sure we were square. Pizza assembled, check. Egg fired up, check. Transfer pizza from baking sheet to egg….blastit. Corn meal on the baking sheet would have helped a lot. Right about then was when David read aloud from the Big Green Egg manual that they suggest assembling the pizza on the grill. So too little too late, DP.

David tried some fancy tricks to get the pizza off the baking sheet, but I had fantastic visions of the whole thing upending and my peppers (my one pepper) going to my begging dog panting at our feet, so I just abandoned the grill entirely and popped that bad boy in the oven. Better luck next time, Big Green Egg.

The oven pizza was fine. It was pretty even. The Italian sausage was great, the mushrooms were delicious, and the green peppers were….crunchy. Ugh. I didn’t mind the flavor they left on the pizza after I picked them all out one by one, but the crunch, ouch, it was like nails on a chalkboard. It reminded me of onions. Green peppers on pizza, out.

I’m back at it with green peppers again tonight, though, and especially since I didn’t mind the flavor, just the crunch, I feel fairly certain this battle is not yet lost.