Is it just me or are fall and winter vegetables a hundred percent more boring than summer vegetables? Also, is it weird that I have an opinion about that? I think it is.

Fine, it wasn’t that bad, but I’ve had some really shitty vegetables three weeks in a row—beets, collards and now bok choy—and it’s hard to keep up the enthusiasm when the hits keep coming. Seriously, beets? Gross. Thank god for pumpkin next week; that should be a gimme.

I recovered from my trauma over the end of the summer vegetable plate at Watershed and got back to business with bok choy on Tuesday. Many thanks to Elwood for finding me a recipe with ham hocks and bok choy; many curses at the farmer’s market for giving me ham hocks that look like lumps of pig butt. My Biggest Supporter Melissa R. and Infinite Naysayer Jon offered to do a stir fry with their wok, since that’s all anyone seems to make with bok choy, but they weren’t available until Thursday so I had to come up with something else for the next two days. Google and I spent a lot of time together Tuesday looking for creative ways to eat bok choy, and here’s what we came up with: stir fry. I did find one Web site that said I could deep fry it and I about fell out of my chair I was so excited, but  when I got further into the recipe it said the method for deep frying bok choy is to just fry it longer in a stir fry. Booo.

I was getting kind of cranky and about to give up altogether (we were within two hairs of my first defeat…and by forfeit, no less) when David reminded me that we have a wok-like contraption (like, how would I know this?) and then said that he would be happy to make dinner while I sat on the sofa and sulked. So my first almost-defeat turned into David’s first battle for the blog. Way to take one for the team, DP.

I was really only able to sulk for a minute or two before getting bored with my self pity (I didn’t have an audience, so it wasn’t really worth the effort); I went into the kitchen to see if there was anything I could do to help. There wasn’t. So I hovered. While David cooked I thought about all the things I’d learned on Google that day that I’d forgotten to tell him, like about separating the greens from the stalks and cooking the stalks first, but I didn’t want to nitpick, and since neither of us would have known the difference between well-prepared bok choy and chewy, overcooked bok choy I just kept my trap shut and smiled my I-know-something-you-don’t-know smile. 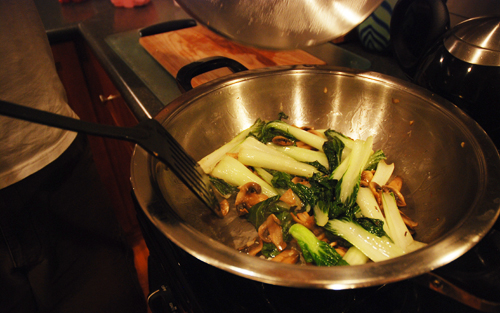 When he was done, David took extra care to lay out his stir fry so I could take pretty pictures, but then discovered what I struggled with early on in this project: veggie sides do not a meal make, and meals take planning, so…. We had turkey sandwiches and bok choy stir fry. Yum.

The bok choy was eh. I didn’t love it, I didn’t hate it, but if I encounter it again I’m pretty confident I can eat it without complaint. Mostly I think I wasn’t keen on its pairing with a turkey sandwich, but I really appreciated not having to cook while I was in my post-summer-vegetable funk, so I’m calling it won and moving on to pumpkins, which I think will get me into the fall spirit in a really yummy way.