I beat the crap out of the green pepper last night. I mean, beat it down. Just like I said I would. Consummate Supporter Melissa R. and Infinite Naysayer Jon had offered to make for us Melissa’s family’s stuffed peppers, which were made up of ground beef, rice and Velveeta cheese. She confided later that the original recipe also included onions and celery (onions are never gonna happen and celery doesn’t happen until….oh look, I didn’t even put celery on the list because it’s either too much like onions or I just totally discounted it as a real food altogether), but Melissa is very accustomed to modifying recipes to suit my anti-vegetable, anti-onion diet, so she skipped those two awful additions (thank you, thank you, Melissa).

Melissa really slaved over the stuffed peppers, so I’m pretty glad stuffed pepper night went to someone other than me (huh….I’ve only cooked once this week so far…this is working out swimmingly). We walked in just as the baking peppers were starting to warm their house with a yummy, peppery smell, and then we stood around the kitchen and ate shrimp cocktail and brie while Melissa put the finishing touches on dinner. The peppers came out of the oven bubbling over with cheesy goodness and I have to admit, even though I was a little apprehensive about trying green peppers again and even though I’m always hesitant to put the first bite of whatever new vegetable I’m trying in my mouth, I couldn’t wait to shovel those peppers on our plates and chow down. They looked so great. 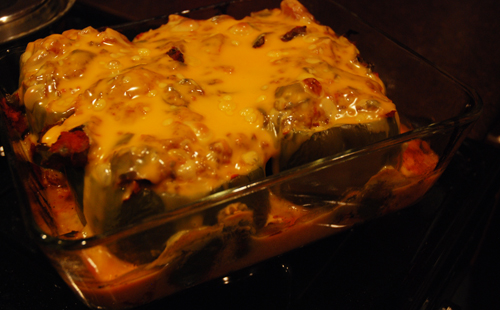 And they were so great. Holy peppers and meat and rice and cheese. I devoured them. 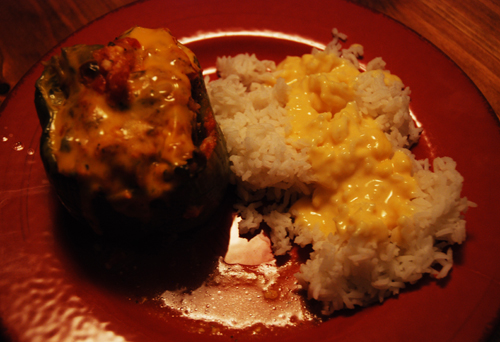 I guess one day I’ll really hate something and I won’t recover. But right now I’m winning the crap out of this war on vegetables.