Victory is mine! And Meat Pusher Elwood’s.

Despite the horrendous rain and floods, and the fact that I skipped one whole night because I was unprepared, pea week wasn’t all that bad. I was counting on winning it. Except I hadn’t yet eaten peas. Plain ole, run of the mill peas. You know, like when someone says to you, hey friend, do you like peas? What kind of peas do you think of? Do you say back, well my friend, do you mean sugar snap peas or snow peas or garden peas or sweet peas or snap peas or field peas or black-eyed peas or split peas or chick peas? No, you don’t ask that, you just assume they’re asking about plain ole green peas, and then you say, ferfucksake no, peas, gross.

That’s what I would say anyway. (And BFF Lauren  isn’t allowed to answer that totally rhetorical question because she probably would clarify.)

Given that gag response, it was my responsibility to myself and the project to confront plain ole peas head on, right?

When I first started this project my grandfather chastised me because he was so horrified that I would consider giving up my meat and potatoes heritage for vegetables, for shame. I assured him that I wasn’t becoming a vegetarian, that I am just broadening my horizons to include more sides with my meat, but as the weeks drag on I’ve noticed my nights are made up of more and more meatless meals. Elwood has recently resurrected my grandfather’s campaign, but more kindly, consistently pointing out how frequently I’m failing to include meat with my veggies. I have to admit I totally agree that this is a huge failure on my part, so when he suggested having a little pig with my peas, I thought, of course, yes, absolutely, yes, yes, yes.

This is the bacon peas recipe Elwood sent me:

The recipe seemed easy enough, and I actually tried to follow it pretty closely, except David still wasn’t home so I was cooking by myself, and cooking by myself is when shit goes wrong. And the kinds of questions I need answered to keep shit from going wrong are the kinds that recipes skip right over (because they assume I already know how to cook…well, screw you, recipes) and the interweb isn’t sure about.

For instance, when a recipe says “4 slices of bacon, diced,” and then later it says, “In a frying pan at moderate heat, brown bacon,” does that mean I dice the bacon before I brown it because the “4 slices of bacon, diced” was written in the recipe before the “In a frying pan at moderate heat, brown bacon” part? Or does the placement really matter because that was just the ingredient list? And should I really only pay attention to what’s in the direction list? If that’s the case, they should have told me to dice it somewhere in the directions, and they should have told me when to do it, like, before or after I browned it. I’m just saying, for people who don’t know how to cook, this could be an important distinction. Like, I don’t have any idea if it makes a difference, but what if it makes or breaks a meal? Maybe it does. I don’t know. Grrrr, recipes. 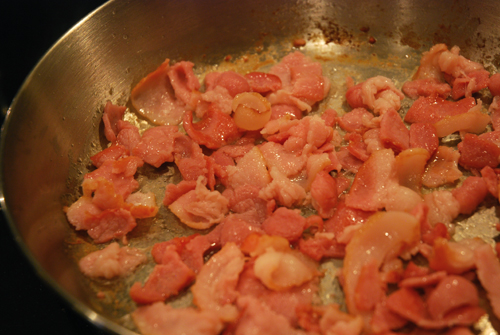 I decided to cut up the bacon before browning it. I based this decision on my previous bacon makin’ experiences, which have mostly all been disasters. I thought maybe if it was cut up in smaller pieces I could try cooking it hotter and faster. I feel good about this decision. So, bacon diced and browned. Next.

I used frozen garden peas, which I thought was about as basic a plain ole pea as I could get without going canned. And that’s when I encountered another seemingly simple recipe instruction that totally stumped me for, like, a minute. What do they mean when they tell me to cook the peas? Because  Lauren and I thought maybe frozen peas are kind of already cooked and then flash frozen, although neither of us was sure about this and we had the conversation in the car and Google wasn’t nearby and …OK, here we go…Google says frozen peas are blanched and then frozen at the peak of ripeness. I have absolutely no idea what that means.  Jesus, peas. I hate you right now. OK, fine. Grrr. Merriam Webster says blanching means scalding or parboiling in water. That doesn’t really clear things up for me, but I’m done looking shit up right now, we’re moving on. So, I was asking myself, aren’t my frozen peas kind of already cooked? Do I need to do anything else with them? I was a little leery of tossing frozen-peas-I-wasn’t-sure-were-cooked into my dinner, especially since the frozen peas had instructions for further cooking on the package, so I decided to “cook” them. I did some more thinking about this and decided that when the recipe said “cooked,” they meant something along the lines of the oh-so-basic-stovetop-steam. I hoped they didn’t mean baking them, frying them, sautéing them, or for fuck’s sake, blanching them. 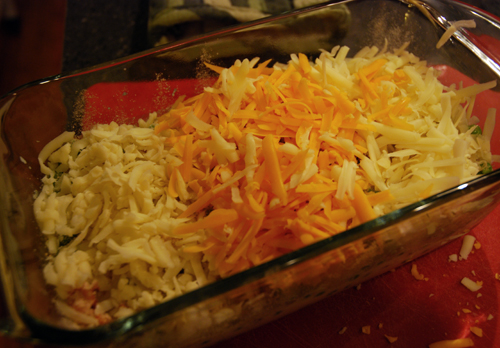 After Elwood had given me this awesome recipe—which even after all this deliberating had come together quite nicely—Nascar Patterson came in from out of nowhere and reminded me, quite rightly, not to forget the cheese. Patterson, good one.

I stood over my bacon peas and stared at my three best melty cheeses, trying to decide which one to use: mozzarella, yellow cheddar or white cheddar. Obviously I used all three. Neapolitan bacon peas. Holy excellent. Holy, holy, for the love of all holy meat, holy excellent.