I was pretty concerned about cauliflower week because it was another vegetable I remember disliking pretty vociferously as a child. That dislike grew to utter hatred until eventually I was offended by the mere thought of this colorless, tasteless, virtually nothingness vegetable even occupying the same breathing space as me. At Christmas one time with David’s family someone brought mashed cauliflower, but I thought was mashed potatoes (and we all know how I feel about healthy vegetables masquerading as potatoes), and I was so disappointed when I found out it was cauliflower that it practically ruined Christmas. I mean, really.

But as I tried to recall some of my other experiences with cauliflower as a child, I couldn’t really remember ever having had it. Maybe that one time at…nope, or at…nope. I couldn’t remember a single time I’ve ever eaten cauliflower. Even that time at Christmas David warned me ahead of time so I was just disappointed that it wasn’t mashed potatoes, but I never had to actually eat it. So why did I hate it so much? Then I had a brief flashback to my childhood and remembered a church lady teasing my dad about not liking cauliflower… !!!! So this is really my dad’s fault. It’s my dad who doesn’t like cauliflower. It was my dad who was so vocal about it all my life.

Ah, the sins of our fathers. 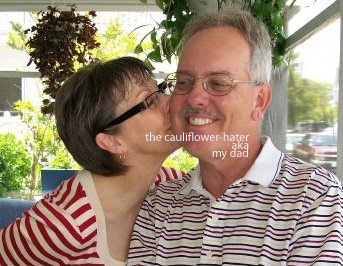 Actually, this little revelation gave me some relief, as if being released from my own hatred of cauliflower pre-battle meant I would probably win this one with no problem. I love when I can start the week with this kind of attitude, because it means I will for sure fuck something up.

Sunday afternoon of that week we were out in the yard talking with our friends Naysayer Jon and Supporter Melissa when Melissa mentioned she had some frozen vegetables that included cauliflower, which we could heat up for dinner that night if I came up with the main dish. In a flash of genius I said, “How about country fried steak?”

Not that I have any idea how to make country fried steak. I know we’ve talked before about how my inability to cook is not exclusive to vegetables—that it extends to all my favorite foods, including meat, which is so unfortunate for me—but I’ve largely, obviously, spent this whole project learning about how to cook only vegetables. This is totally valuable (and sort of the whole point of the project), except that I’m not a vegetarian, so knowing how to cook other things is kind of important, too. Country fried steak is right up there with chocolate cake as one of my most favorite foods in the world, so since Melissa was going to make the cauliflower, I thought this would be a good opportunity to take a break from learning about vegetables and give myself a little time learning to cook some meat. So, Battle 14—Day 1—Cauliflower, became Battle 14—Day 1—Cauliflower /Cooking Experience (not numbered)—Country Fried Steak.

(Country fried steak is a really great meal to make if you’re pissed or anxious or if someone has just cut you off in traffic, because pounding meat is a remarkably cathartic exercise in releasing aggression. I highly recommend it. I wasn’t mad that day, but I totally filed that little bit of useful info for use at a later date when one of you assholes naysays my awesome project.)

(A better cook than me would have experimented with seasonings here, but I’m still me and am pretty sure I forgot to do this part.)

(I smirked at the use of the word ‘dredge’ here.)

(I smirked again here. I’m just saying, I don’t think people of yesteryear would have called the batter process “dredging.” So I did think this part of the recipe was a little nonsensical, but that’s fine, Emeril, you have your own restaurant and a toothpaste commercial and I have a blog detailing my ignorance with excruciating specificity, so I say you can call it whatever the shit you want. Dredge away.)

(Oh look…another opportunity for me to forget to season the meat.)

When Jon and Melissa arrived for dinner I was just finishing the meat pounding process. Wow. I loved that a little too much. Then I made an assembly line of the ingredients for country fried steak and one by one I “dredged” the meat in flour, then coated them with egg and milk, then dredged them in flour again, then dropped them in the super hot oil on the stove. I looked around the room at David, Jon and Melissa, and when no one objected to anything I’d done, I realized, Bam! I was frying some country steak. And then I lost my shit. For real. I was so excited that I was making one of my most all-time favorite meals forever in the whole universe right there in my very own kitchen all by myself that I could hardly contain my excitement. I jumped up and down. And I jumped some more. And I kept jumping and bouncing (which was not unlike my totally fly dance moves some of you may have been fortunate enough to witness in the recent past) until David said, “Wow, you haven’t been this excited about any of your vegetables.” I mean, it was country fried steak, yo.

But then I started making the gravy, which made bouncing difficult since it required standing stationary at the stove and whisking (“constantly”) for a long, long, long, long, long, long, long, long time. My excitement over the country fried steak waned considerably as I stood there whisking and my friends moved about the house, doing fun things other than whisking. I was reminded of pumpkin cookies when I was tethered to the kitchen while my friends were engaged in 100 percent awesomeness in places far, far away from the kitchen. Here I was again, shackled to the stove. Ugh. Gravy. Terrible. 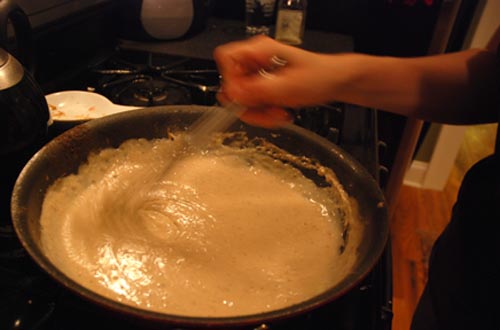 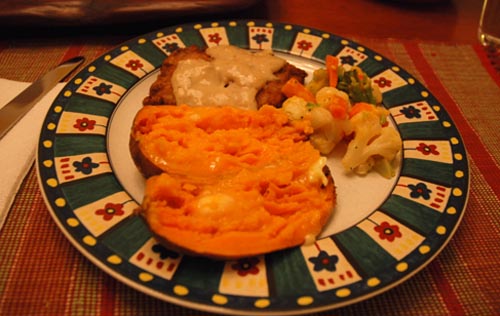 Like three years later when the gravy was finally done, we set the dining room table and fixed our plates with the world’s most awesome homemade country fried steak and gravy. Then I remembered the cauliflower. Damn.