Even though I won cauliflower easily enough on my first try, I decided to do it again the next night so I could cook it myself. I don’t have to cook the veggies myself to win them, I just wanted to. So I did. The fortunate thing about having already won cauliflower was that when I fucked it up, and I did, of course, it didn’t matter because I already knew I liked it.

However, my girl Vegetarian Erin joined for dinner, so even though I didn’t WANT to fuck up for myself, I NEEDED to not fuck up if I was going to be feeding someone else.  I did a lot of research on cauliflower before trying to cook it and ultimately decided on a two-point goal for dinner that night: I thought I should try to conquer cauliflower mash since I’d been so afraid of/pissed about it at Christmas that one time, and it needed to be vegetarian since Vegetarian Erin is a vegetarian.

Finding a recipe for cauliflower mash was easy enough, but finding a recipe for vegetarian cauliflower anything  isn’t easy at all. It turns out that because cauliflower naturally has no taste, the world thinks you should add a tasty meat stock of some kind to any and every cauliflower dish, and in general I wouldn’t disagree, except for the part where I know even meat stock counts as eating meat to vegetarians. Actually, I wouldn’t know that except for this one time Erin, Amber, Owen and I were on a road trip and we stopped for lunch at this little cafe, which was slightly off the beaten path in The Middle of Fucking Nowhere, Virginia. This is what they had on the menu: meat and potatoes. Erin sighed. I beamed. Virginia seemed great to me! Our well-intentioned but very dim server listened to Erin’s questions about the menu with interest, but he was clearly confused. Erin, who had been suffering from a really bad cold our whole trip, asked in a sniffly, pitiful voice, “What do you have for vegetarians?” The look on his face indicated to us that he thought “vegetarian” was a medical condition, which could be catching and it was probably what was making her look so ill. We could see the wheels slowly turning and then aha! a lightbulb. He went to the kitchen to inquire and came back with a very, very short list of non-meat items: potatoes.

“You can’t have that!” shouted Mr. Well-Intentioned but Dim-Witted Server Guy.

We sat there stunned. Apparently the French onion soup was made with meat stock, and he for real thought her condition would be disturbed by meat. We had to get the fuck out of there. These were my people, my food kin, and even I was scared.

But it was a great learning experience. I learned that many, many, many things (like vegetables) are prepared with meat stock to give them flavor where they wouldn’t otherwise have any (like cauliflower). Thank you, meat. After a lot of digging, I located a cauliflower mash recipe with no meat stock ingredients. So, meatless cauliflower, check.

But for our main it was all meat and I wanted to try pan frying again since I’d had such success the night before with country fried steak, but this time I was going to see what kind of damage I could do to fried chicken. But not regular ole fried chicken, I was going to make chicken sandwiches ala Chick-fil-a. (Erin brought grilled tofu for her sandwich.)

Once I had our MNF menu sorted out, I began prep. And wow, I really enjoyed working with cauliflower. Despite its relatively boring appearance (and taste), it was a really interesting vegetable to get to know. I peeled it apart, layer by layer, cutting the tiny stalks and pulling off the florets until I had a tidy pile of pieces for steaming and mashing. I really relish my prep time in the kitchen—cleaning and cutting vegetables, munching on crackers and hummus, singing and dancing when no one is looking—and think this will be what motivates me to continue cooking after the project is over. It just makes me feel good.

Once the cauliflower was on the stove, I started the chicken. Prepping the chicken was soothing, too. And that’s about where all the goodness ended. At prep.

Frying a couple of cheap round steaks was a cakewalk; frying chicken is an art. My fried chicken was the driest, most tasteless, chewy, boring piece of crap I’ve ever eaten. When I told my friend Kathy the next day what I’d done she said, “Yeah, leave that to the experts.” Yes. Good advice. 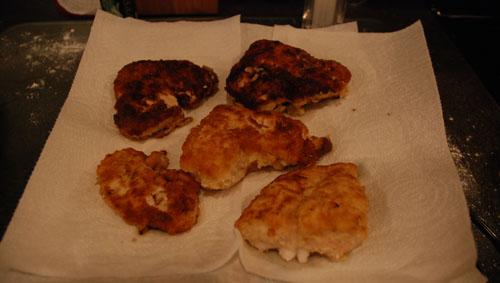 Then I took the cauliflower, which I had been boiling, off the stove and carried it to the sink to drain it. I poured the cauliflower into the colander and looked around for somewhere to put the pot, which I would eventually put the cauliflower back in to mash up. So, pot in one hand, colander in the other. Empty sink right in front of me. Pot in the sink, obviously. Then I had the colander in my hand and…oh, what’s that over there? Who the fuck knows what distracted me, but I found the need to put the colander down and the only reasonable place to put it, I thought, was back in the sink, which was where I had just put the pot. And there it sat, drip, drip, dripping water right back into the pot I intended to use again. This would have been fine, of course, if I had noticed or if it had occurred to me what I had done, because then I could just pour out the water before I put the cauliflower in the pot, but that only happens to real cooks and people who pay attention to shit. Instead, when I was done being distracted by looking at myself in the mirror or whatever else was happening that was so much more important than my cauliflower, I dumped it all right back in that watery pot and mashed, mashed, mashed until I had a great big mess of wet cauliflower. Mmm yum. 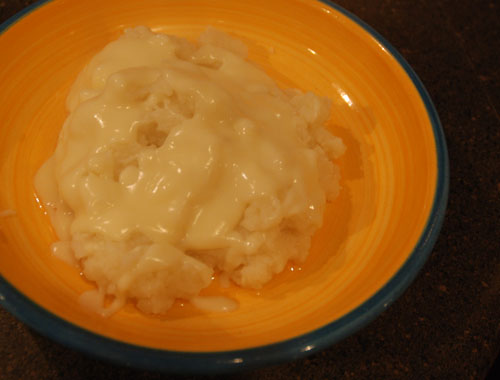 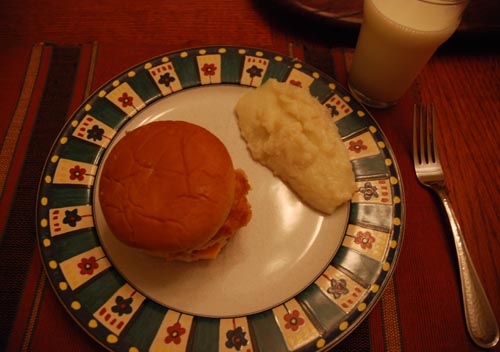 Meanwhile, the béchamel I was making to go with the mash finished and because I still wasn’t sure what was happening with my wet cauliflower, I added the creamy sauce to the mash, which made it…wetter. Total. Failure.

Erin, David and I choked down our sandwiches and cauliflower and said mildly congratulatory things like, I can see where this would be good if….(insert the hundreds of other ways my meal might have been edible if only I for real knew how to cook). Erin’s tofu sandwich was a success, though. So. I still win.

One thought on “battle 14–day 2–cauliflower”