In case any of you actually read this regularly and have noticed posts have become slightly more infrequent in the last few weeks, let me catch you up on what’s happening with Julie v. Veggies right now. You may remember that I had a minor (major) panic attack when summer turned to winter and the vegetables went to shit. That slowed my enthusiasm significantly. Then pumpkin week happened, which picked up my spirits, but then my vacation happened, which put the brakes on the speed I picked up from pumpkin.  In the midst of my vacay exhaustion—and, might I add, the time change, which I hate (seriously, fall, WTF)—I discovered I had one vegetable on the list twice and one week on the list with no vegetable at all.

The project is kicking my ass a little. I’m not saying vegetables are beating me, I’m just saying the project could be a little nicer. Project, back off a little, eh?

So here’s where we are on the schedule now: I’m all caught up on pumpkin and kohlrabi; cauliflower happened next, and even though I have done it I haven’t written about yet; I have a week off (this week); and sweet potato is scheduled for next week to coincide with Thanksgiving. I was going to use this off week to catch up on posts, but instead I started early with sweet potatoes. So I’m going to simultaneously try to catch up and tell you how it’s going with sweet potatoes.

Another thing that happened in the last couple of weeks was David and I got a new housemate. Remember Christa from squash casserole night? Christa has been following the blog very closely and was so worried the project would eventually get the best of me if I kept fucking things up in the kitchen as regularly as I have been, that she thought it was best for everyone if she just moved in to show me how it’s done. And Christa knows how it’s done. Holy good goddamn dinner. The woman can cook.

Monday was supposed to be the first night of my off week, but Christa had brought home some locally grown sweet potatoes, educated me on the difference between conventional and local or organic sweet potatoes (which I totally knew), and started dreaming up all the things we could do with said sweet potatoes. I just watched it all unfold in awe. I was in a bit of a trance and secretly strategizing ways to keep Christa forever, when she whispered (or maybe e-mailed) the words ‘grass-fed brisket.’ I snapped to attention and said fuck my week off, we’re having meat and potatoes, my friends.

The challenge with meat-and-sweet-potato Monday was that one of my many, many, many vegetarian friends was joining us for dinner. I don’t know how, as carnivorous as I am, I have managed to collect so many vegetarians, but I’m sort of swimming in them. And if there’s one thing they’ve taught me it’s that they do require, for nutrition and other purposes, meals more substantial than meat-and-potatoes-minus-the-meat. I racked my brain for things vegetarians eat and asked our dinner companion, Vegetarian Erin, “Um, how about some tofu?” That seriously happened.

But Christa, because she’s amazing, said, “What if we do sweet potato quesadillas?” Obviously. 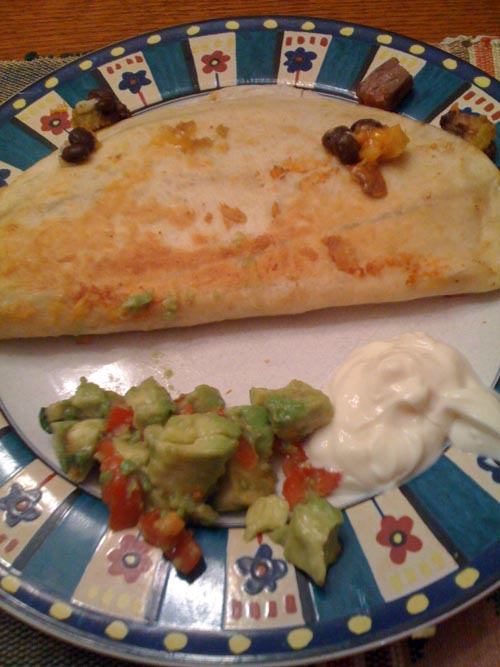 Then she started pulling things out of drawers and cabinets—utensils I couldn’t identify, spices I’ve never heard of, food I didn’t know we had—waved a magic wand and made the most spectacular, magical meal of sweet potato-y, black bean-y, habanero pepper-y, garlic-y, cheesy quesadillas. And mine had brisket. Wonderful. Heavenly. Too good.

I have to say, even though this project is kicking my ass a little, I have eaten better in the last three months than any other single period in my life. I don’t hate it.

And Christa may or may not forevermore be chained to a chair in my basement. You don’t know.